This week we continue last week’s post about elements in Shadow Puppeteer that have
been added or removed throughout production.

The game has not always been as it is now. Many gameplay elements have been tried and
tested, some found too light and others kept and refined.

We want to share with you the gameplay elements and levels that we explored and
scrapped, and those that came in late and were kept. We find it fun to look back on our
choices, and we hope this trip down memory lane will be interesting and educational. 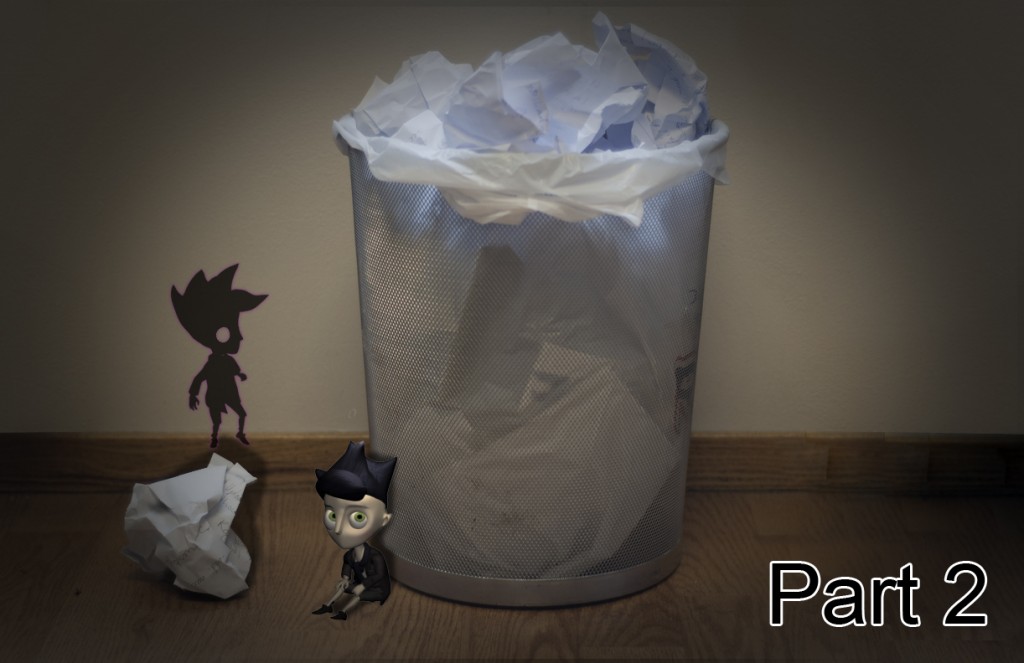 2013
Dangerous/sharp shadows (removed)
A topic that was much discussed ever since the start, was the concept of sharp shadows. That with the right light at the right angle, an everyday item’s shadow could become deadly; like a red hairbrush lying on a dresser creating a set of deadly shadow spikes. 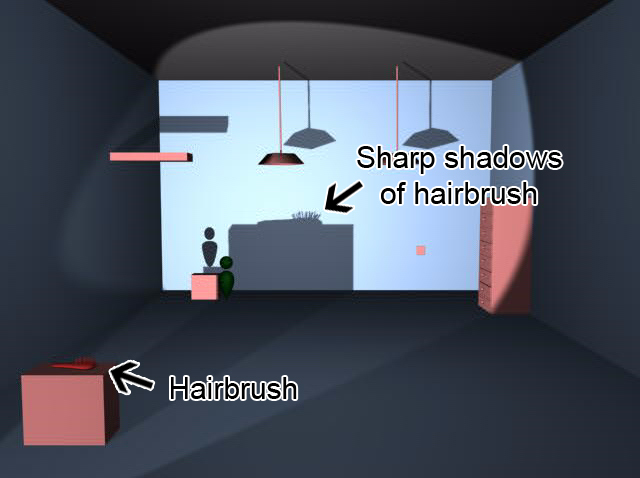 While this idea fit extremely well with our play with lights and shadows, we found it difficult to implement well. For instance: How sharp would a shadow need to be to be deadly? Would the players be able to know instinctively? If we were to add the freedom that we wanted to this, would it take too long to program and ensure that it would be bug free?

Earlier the game had focused mainly on the play with lights, but this made the game more about the Shadow. We had gradually changed the gameplay so that the Boy would have more challenges and not merely be the Shadow’s little helper. As we added all the different gameplay elements for the Boy we, of course, realized that we had way too many features.

It was with a heavy heart that we decided to not add the dangerous shadows, making the game more balanced, but also less creative shadow-wise. In reality there are still a million things we can do with our use of lights, and focusing on having a set core of gameplay makes the development so much more manageable.

Train journey level (removed)
When we planned the transition between the caves/ mines and the industrial level we came up with the idea of the characters getting there by train. We conceptualized a level where the players traverse the carts of the moving train, trying to get to the Shadow Puppeteer in the locomotive.

It was going to be varied (different gameplay elements emphasized in each cart), thrilling and absolutely impossible to get in budget-wise. Another reason it was not kept was that the level in itself would be so drastically different from all other levels that it wouldn’t really fit.

Enemies (removed)
An idea that was brought in quite late and championed for a little while was the thought of having enemies throughout the levels. Small encounters could make things feel more exciting and fresh. The boy and shadow would get more physical (no pun intended) and active roles. But the idea of bringing in these frequent violent confrontations would go against the core values of our game and its characters. No matter how exciting it would be, our Boy would never be Conan the Barbarian. He is a timid and gentle character and giving him the role of “shadow slayer” would break with that completely. Combat would also take focus from our already established gameplay. 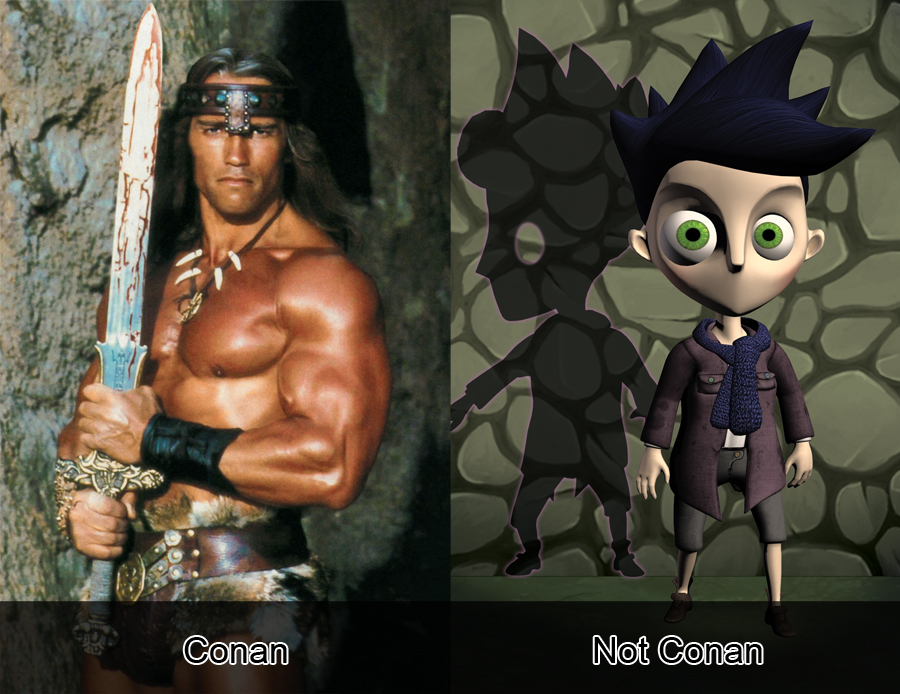 (Simple comparison between the Boy and Conan)

In the end we decided to stick to our original vision and trust that our gameplay would be interesting enough to our players and offer them an experience worth their time, despite the lack of combat elements.

Thread GUI meter (removed)
Once we brought in the idea of the thread as a mechanic to keep players mindful of each other we were challenged with how to visualize it. It was important for the players to understand how it worked; that it could be stretched a distance, but that it had a breaking point which meant you “died”. We had the line that appeared between the characters, but this gave no indications of how far you could go. So we designed a thread measuring meter as part of the GUI and placed it at the bottom of the screen. It had the image of each character on the left and right, and a coloured bar that started at the centre. As the players moved away from each other, the bar would stretch towards the outer edges, When it finally reached the pictures of the characters it would break.

For us it worked great but again, as with the earlier mentioned picture – tutorials, players have selective vision. The players had problems noticing the bar and then using it as they played. Also it looked terrible and ruined the visuals. So we removed it, and found that players were able to understand how the thread worked as long as we refined the visuals and effect of the thread that was drawn between the characters.

Light type displays (Removed)
Like with the thread and meter we were unsure of how intuitive the source change mechanic was. So we added a light type icon to the GUI. This was either a moon or two different lanterns. Again, the icons were more confusing than informative, and we removed them, instead finding other ways to convey sources.

Scrapped puzzle levels (removed)
Shadow Puppeteer is, amongst other things, a puzzle game so we have added quite a lot of “token” puzzle levels. Not all have worked that well and have felt like cheap padding so they have been removed. 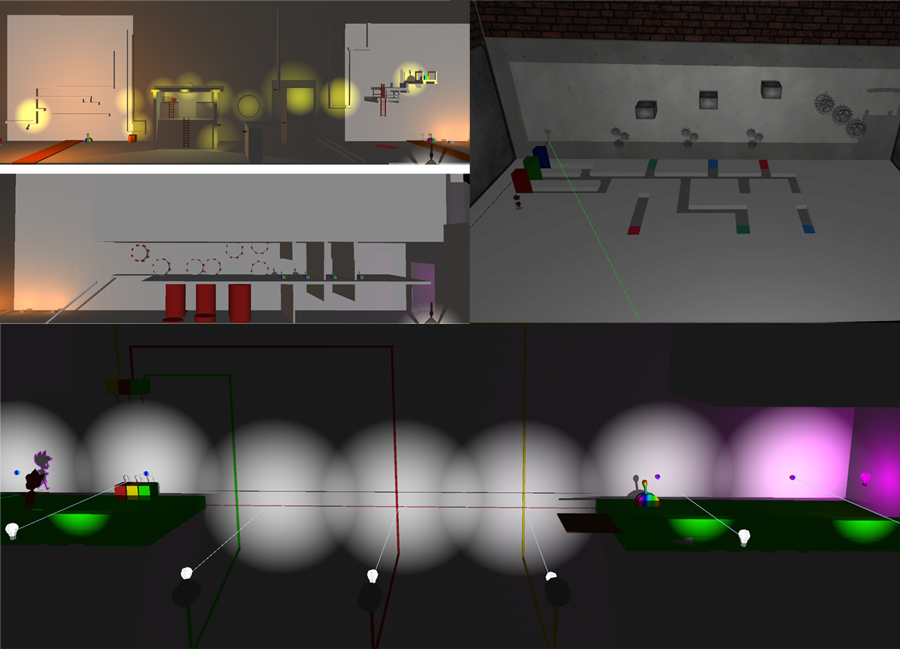 (These are some of the boxed levels that were removed)

Intro cutscene 2 (removed)
Since the making of our first intro, a lot had changed with the world and the layout of the world. The character models had got an upgrade too (the boy now had fingers!). So we felt a need to make a new intro.

In many ways we LOVED the intro cutscene we had. It showed in a good way how the shadows were separated from their “owners” and how the Puppeteer collected them. Also it had a great dramatic moment as the shadow holds on to a beam and the boy manages to save him by closing the window. All of this was cool, but as we discussed the story we had some realisations. Our intent was that the Boy close the window in panic, instinctively. In the video it looks more like he knows what is going on and what to do. Would we be able to create something to make the intent clearer?

And also, it just seemed a bit too easy. If closing the window was enough to stop the process, why hadn’t anyone else done it too? And did they all sleep with their windows open in the first place?

And finally, it said something about our characters and the odds they are up against. They got “lucky” in escaping the Puppeteer. They are in no way his equals. But they are still going to try to stop him, and that sends a very clear and different message about the characters.

Thanks for reading about our “darlings”. We value the experience of having explored many different elements. the process of evaluating and revising gameplay and other game aspects help you focus on what’s important and (hopefully) prevents having an impossible amount of features.