We have come a long way.

Shadow Puppeteer is an asymmetric co-op game where you play as a boy and his shadow.
The boy exists in the physical 3D world where he can run, jump, climb ladders and interact
with selected objects (marked by a cogwheel). The Shadow exists in the worlds 2D space,
where he is controlled in two axes. For him every shadow is physical. He can run, jump and
interact with the shadow of the same objects as the Boy. For the shadow, though, gravity is
ever changing depending on the light source he is in. 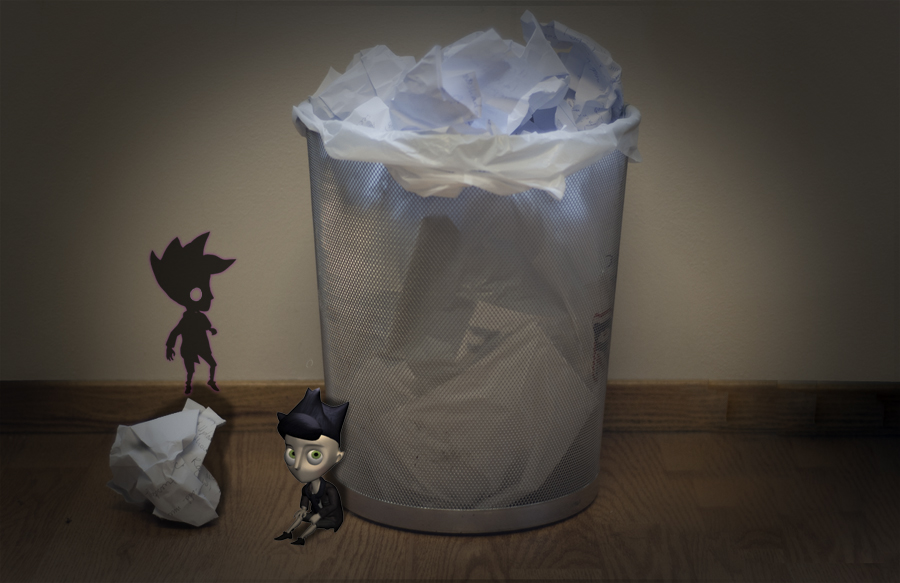 The two characters can work together by manipulating each others worlds, through selected objects, and later in the game through a lantern held by the boy that creates special shadow tools.

The characters are deeply connected and cannot stray too far away from each other without dying. In the game you will die instantly by either falling into endless pits or water, getting hit by heavy objects or being too close to an explosion. The shadow will also die by getting too close to lights or getting attacked by shadow creatures.

As characters in the game, you only have the Boy, the Shadow and the Shadow Puppeteer.
The game’s story is told without any text or dialogue, resting solely on the audio, music, animations and gameplay. 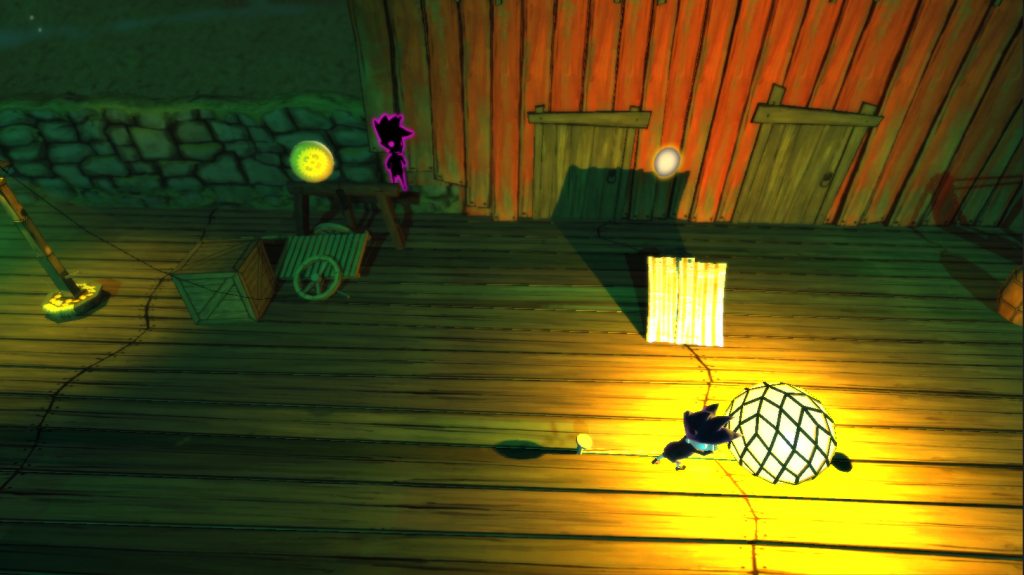 But the game has not always been as it is now. Many gameplay elements have been tried and tested, some found too light and others kept and refined.

We want to share with you the gameplay elements and levels that we explored and scrapped, and those that came in late and were kept. We find it fun to look back on our choices, and we hope this trip down memory lane will be interesting and educational. 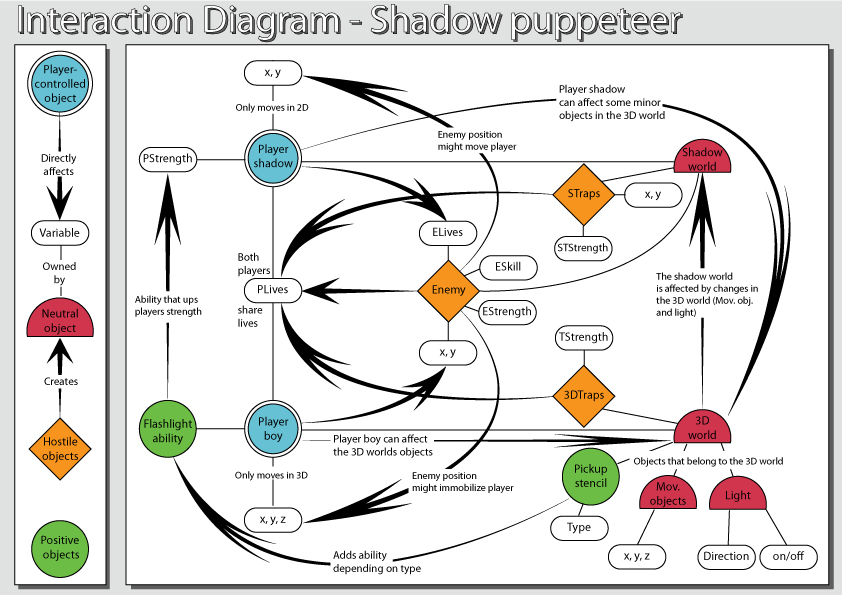 2010
Helth system (removed)
In the very beginning of the development the idea was to have health points shared by the two characters. If one got hurt, the other would get hurt. Until they had no lives left. But as we, then, started planning the HUD we felt that this was a bit old fashioned and contrived. We decided remove health all together and to go for an instant – death approach instead. This, we would see later, had a huge influence on the gameplay in ways we had not intended.

2011
Playground swing (removed)
Creating the prototype, the Shadow seemed to have so much more fun things to do than the Boy. Wanting to play with physics, we added a swing for the Boy that he could use to boost his jump. This was great fun, swinging him back and forth to get higher. We had competitions to see if any one could get him to do a full circle swing (he could).
This was removed because it just didn’t fit the style that we were going for later with the demo (swing, I miss you so ;_;). 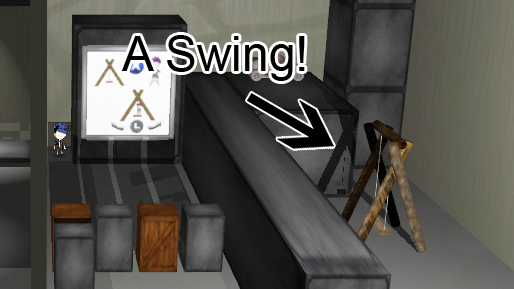 (From the original prototype)

An intro cutscene was made to convey the start of the story for the prototype. This consisted of hand-drawn pictures animated in After Effects and composed into a video.

Here the story was that the Shadow Puppeteer only went through the city awakening shadow creatures and creating an army. One of these creatures sneak into the Boy’s room to hurt him, but the Boy is rescued by his brave shadow.

This story was changed as we felt the characters, being small children, needed some incentive to go running after a scary villain. In this version of the story we didn’t see what would stop the Boy from running and waking up his parents.

When we developed the game beyond a prototype we changed the story and decided to make a new intro, now in full 3D to better match the overall look of the game.

Picture tutorials on wall (removed)
The team played with a lot of different ways to get tutorials in the game. None of us really like intrusive and flow – halting tutorials, so we wanted to find some way of informing the player without being intrusive. Also the decision to have no text in the game had been made very early. In comes the picture – tutorials. We felt these were humoristic and non – intrusive enough. After hours and hours of different testers, we realized that very few actually noticed the pictures, even when they were stuck. Go figure… 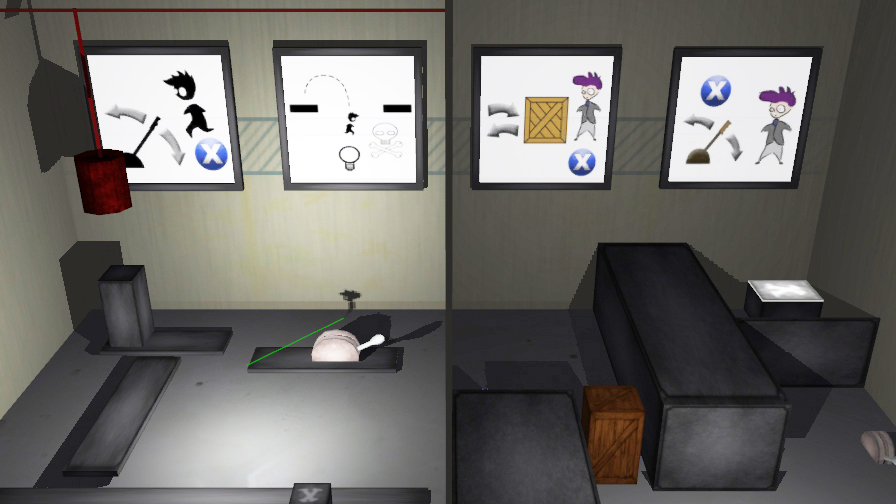 Thread connecting the Boy and his Shadow (added)
In Shadow Puppeteer, co-operation between the players is the most important feature. As we had testers play, we realised that they didn’t necessarily much care about their gaming partner. Running away from each other, not being mindful of each other and generally making our lives difficult. We wanted shared screen co-op, not this split screen silliness.

This is when we realised an important part of the story. We had already started debating the character’s motives for chasing the Shadow Puppeteer, and why there would be no other characters in the game. It was important for the team that the game kept it’s lonely and isolated feel, because without it would not “feel” right.

We realized that the reason why the characters would go on their quest, and why they were alone was because; all living things are deeply connected to their shadows. Without the shadows people collapse into unconsciousness, and the Shadow Puppeteer has just stolen every shadow, except one.

Adding this thread made the relationship between the characters feel much more real, and as a selfish player went along disregarding his partner, he would be punished for it (muahaha). 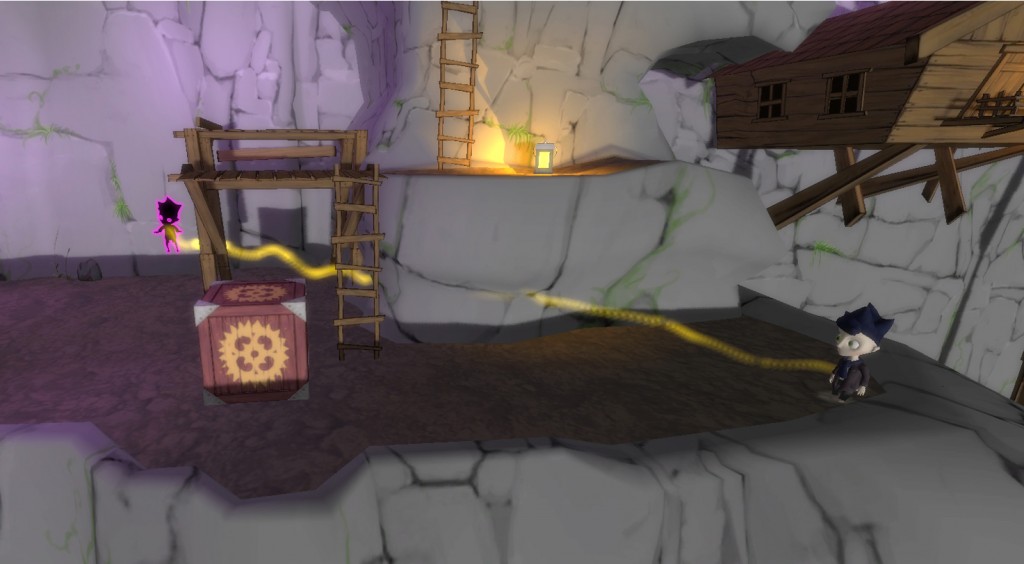 2012
Swinging ropes/lights (removed)
In the prototype the boy had the ability to bump into light bulbs hanging from the ceiling, making them swing back and forth, creating paths for the shadow. This was incredibly fun and so dynamic. We later added that the boy could hang onto these lights to swing them left and right in a more controlled manner. 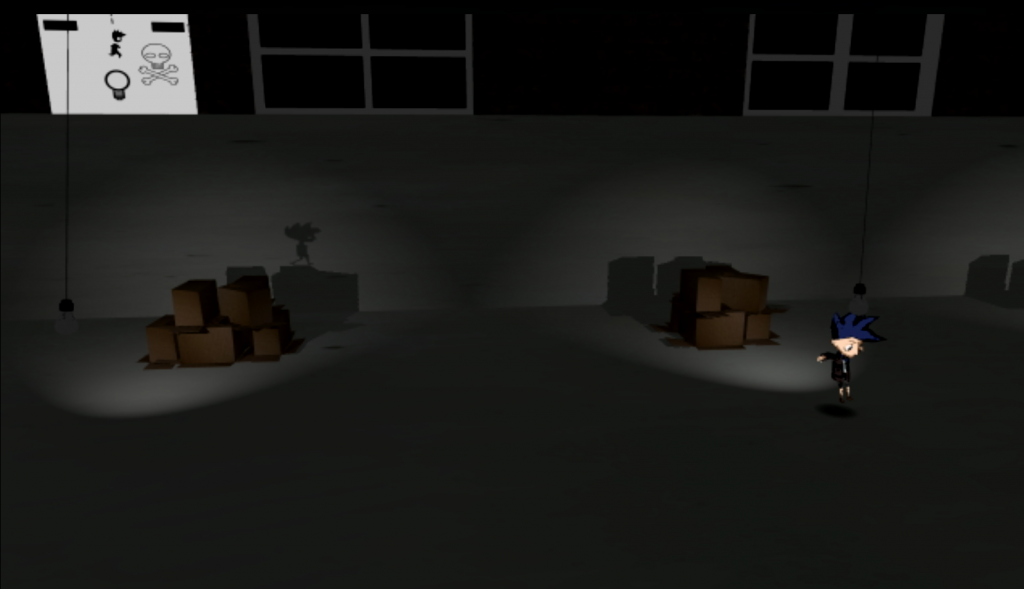 (Example of swinging lights in the prototype)

Ultimately this was removed. It was sad, but the mechanic didn’t work that well, and it gave us a mountain of bugs to try and sort out. How much time should be spent on this buggy, but cool feature? We did an evaluation where we found that it took focus away from our core gameplay, and if we had to choose what we wanted to spend our time on it would always be core. So we removed it.
Also… they boy’s design didn’t really allow him to grab anything above his head.

Fall damage (removed)
In the demo of the game, we worked on using the 3D – environment in more interesting ways. But we kept finding it difficult to restricting the Boy in some places. He could easily just jump down without the help of the Shadow. For a short period we tried adding “death by falling down”. This was removed very quickly as it was difficult to really gauge how far the Boy could and could not fall, greatly annoying the players.

Movable everyday objects (removed)
We explored to what extent our characters should be able to mirror real-world abilities. One of these things were which items the boy should be able to move. Moving chairs IRL is easy, why shouldn’t he be able to? It gave us new possibilities with gameplay and level design, which was very cool. But in the end it was removed because it was not clear enough which objects could be moved and which could not. Giving the characters only a set type of items to interact with communicated more clearly to the players what their options were in a scene. Otherwise they ended up running around the entire scene, trying to move everything, and that wasn’t the point of our game. 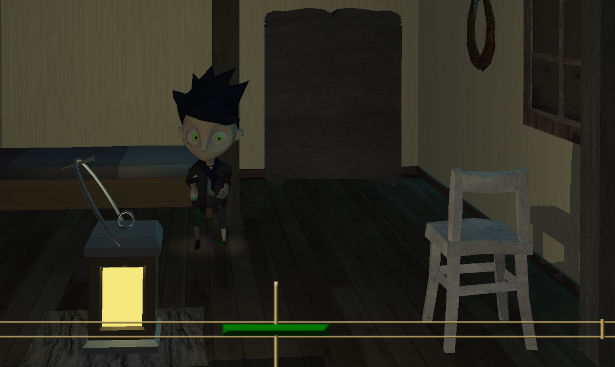 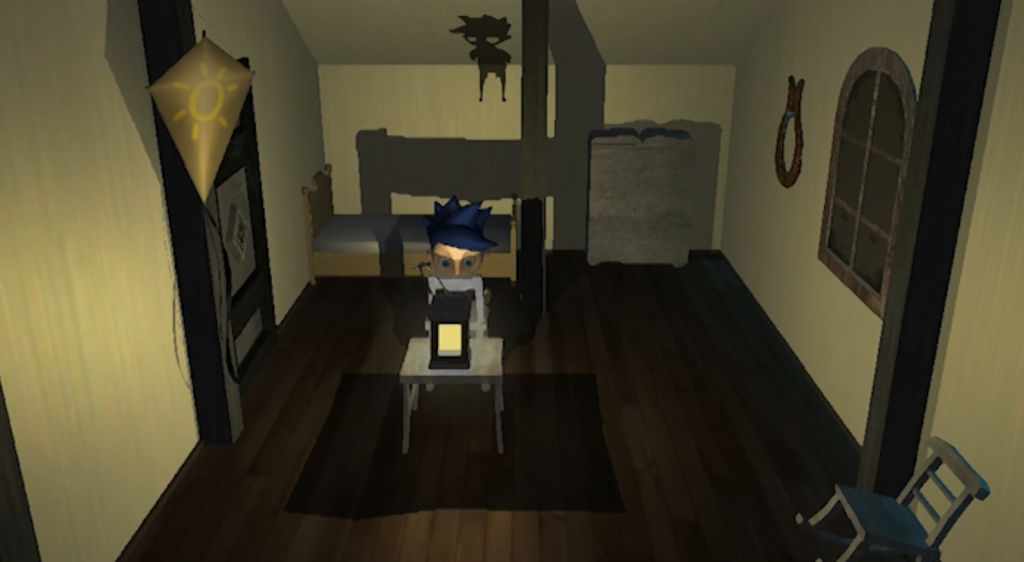 Earlier we had removed the picture tutorials, because no one saw them anyways, but with a lot of complex mechanics we still needed explanations. Still wanting to only use images, we decided that as you were introduced to a task, an image would fade in telling the player about the specific mechanics he would need. 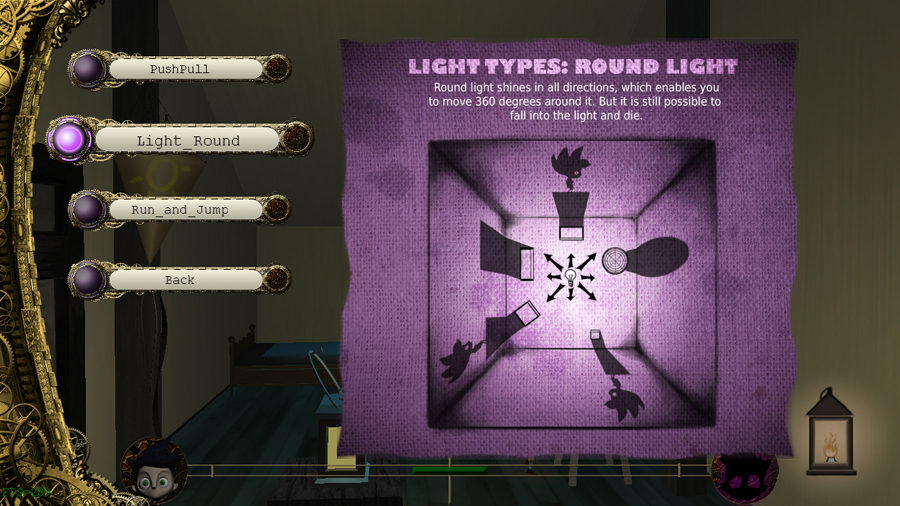 (Example of a old pop-up tutorial)

Join us next week as we continue with Part 2 of “Gameplay elements: «Darlings» that have come and gone”