In our previous “Tagalong Trap” post we talked in general about cooperative games, what components make them “true co-op games” where both players perform active and meaningful roles. We also cited examples of how we implemented these components when designing Shadow Puppeteer.

This time, we will go more into depth about specific ways of working when developing co-op games and give examples of how this was done for Shadow Puppeteer. 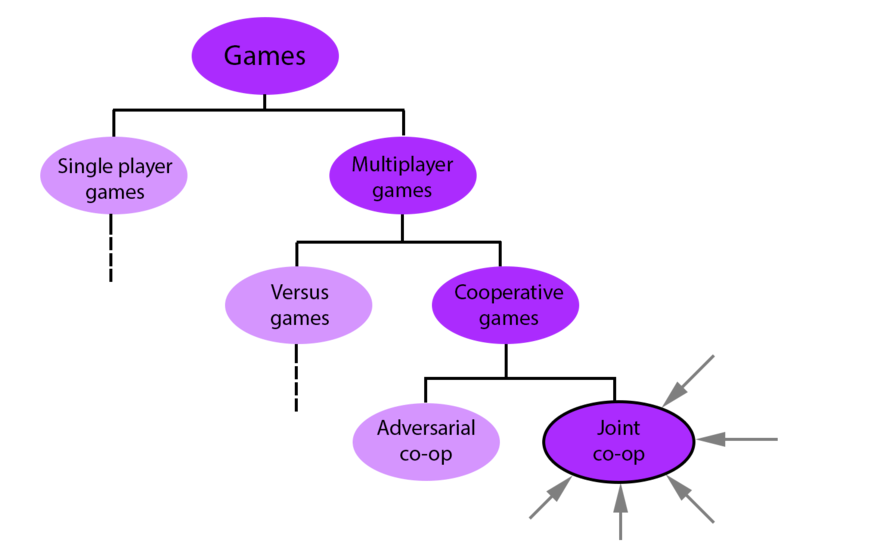 The basis for what we want to share comes from what we have learned in our development of Shadow Puppeteer, a Joint – coop. This is merely our take on the subject of a specific type of co-op development and is of course not the only “correct” way.

The challenge of co-op

Many games strive to support two players, but in reality, they are optimized for just one. In these games, it is only the first player who gets the full gameplay experience, while the second simply “tags along, this is what we call the “tagalong trap”.

In our opinion, a true two-player game gives each player an active role in helping the team progress through the game and are essential to each others experience.

Co-op in both Narrative and Mechanics

Most developments of games have different starting points. Depending on your core and vision your game might be inspired mostly by mechanics or by narrative. Either way we feel it is crucial to always let the co-op nature of the game guide every part of the game.

Focus: Co-op in your narrative

If your game has any kind of narrative, you need to think about the story progression. What is happening in the story and how does that affect your character(s) physically and emotionally? Are there changes happening in the character that should be reflected in the gameplay?

With a co-op title your characters should have equal story progression. But the question is, do they develop in tandem or asynchonously? How do their experiences coincide? How do they differ? Try to divide the story into two and consider it from each character’s perspective. Two characters may enterpret the same event and have it affect them in different ways.

Boy: Why are we chasing the scary guy?   Shadow: Don’t be obtuse, we’re the heroes!

WIth Shadow Puppeteer we had a premise of two characters. This set a framework for the mechanics and narrative: Two characters, different dimentions.

We wanted both characters to have their own distinct purpose, mechanically and emotionally so we decided to create a rich backstory. Even though our players would only be told a fraction of this, Simple facts about our characters inspired and helped us enrich our gameplay. This kind of exercise also helps create consistency in the development of characters, style and gameplay.

Building a story for two

Creating an engaging co-op story can be a challenge. How do you create a story that balances two characters without bogging down the narrative into something incomprehensible?

We found that there are basically three solutions:

In Shadow Puppeteer we made the choice of developing the story around the villain. He is the one who initiates the inciting incident, and creates the conflict. He is the focus point and catalyst for the development of the story, and is responsible for bringing the player characters together. He has the deeper story with character development, even though this is only hinted at in the game. 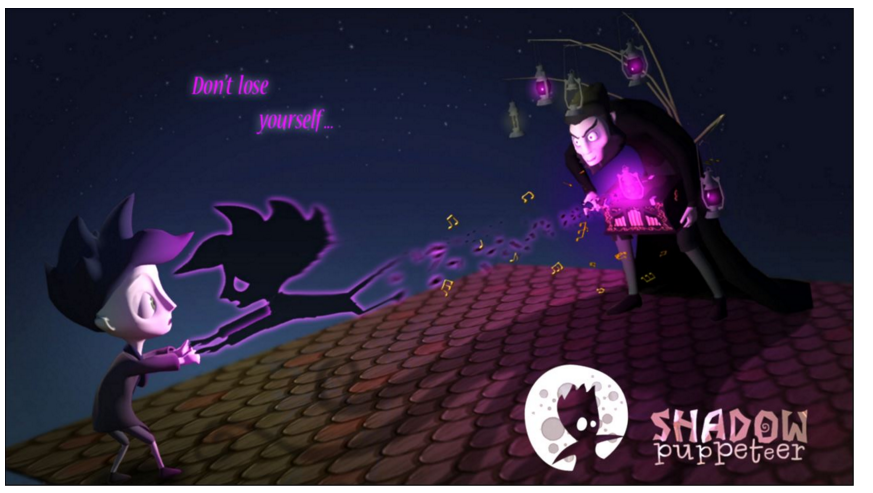 In this early promotional image we see the relationship between the protagonists: The boy and the shadow, and the Antagonist, the Shadow Puppeteer. We see how the Puppeteer unites the player characters giving them both a narrative purpose.

Focus: Co-op in your mechanics

Narratives are often an important part of games, but games wouldn’t be games without the mechanics. Looking at the character co-op mechanics, we realized that we could divide them into two categories: Core and Complimentary. Core being the main actions that the character will always preform in the game (like running, jumping, pushing crates) and complientary being the “special” skills you learn as you go in the game (like, in our case, using shadow stencils).

If the two players share all the same mechanics it becomes a symmetric co-op game, like Portal 2. By introducing individual core and or/ complimentary mechanics we create an asymmetric co-op: Two players that have separate experiences as they play together.

Originally we tried to give our player characters different core mechanics, but due to the premise of them being in different dimensions already setting them apart, this created too much of a divide, and made it difficult for them to relate to one another. Therefore we gave them similar core mechanics, but gave them unique complimentary mechanics. Through the individual skills in the complimentary mechanics we could ensure that both players were crucial to the progression in the game while still feeling connected.

In Shadow Puppeteer we have 4 shared, core skills

To make sure that the introduction and frequency of gameplay elements is well portioned out, we like creating “skill charts”. A skill chart is a tool to balance the progression. We note when gameplay elements are introduced and in what levels they are used. Here we see an overview of the first 11 levels of Portal and of Shadow Puppeteer.

It is also useful to note that you don’t have to use every gameplay element in all subsequent levels after its introduction. Sometimes it’s good to simplify to let players focus on master certain elements. These skill charts don’t differentiate on whether it is a single player or co-op game.

In comparison, above is the skill and action chart from Shadow Puppeteer. This is much more detailed, as we also made notes of when the individual players perform each action. We did this so that we could review the level of importance and participation of each character individually.

These are just some of the considerations we have seen are important, and some of the ways you could tackle the development of a asymmetric co-op. There are a ton of ways to develop games, and we still have more to say on the topic which we will save for a final and third part of the “Tagalong Trap” topic.

In the end, to create a true co-op experience we believe you need to consider the narrative, mechanics and progression and make your players equally important throughout your experience.

If you have more ideas and thoughts, or have great liks regarding this topic. Please feel free to make a comment below.