We convey important parts of the story in our game through cutscenes; small videos without gameplay. Today we want to share with you the creative process and steps in the production of these cutscenes.

In an earlier post about Pre-rendered Cut-scenes; A Blessing and a Curse, Klas detailed his workflow when setting up a scene, animating and rendering/compositing a scene. Today’s post will focus on the cutscene development as a whole; who does what, when and how.

Our story in Shadow Puppeteer is simple, but has a depth that we want people to see. The players become a part of the story through the cooperation they go through. The bond between players, between the Boy and his Shadow, is the most important aspect of the game, both story-wise and as an interactive experience. The cutscenes (pre-rendered and in-game alike) have a huge role in getting these things across.

(Final screens from a cutscene)

We only have three main characters, and the Shadow Puppeteer is the only character that is not controlled by the player. We give the players a glimpse of the Shadow Puppeteer’s motivation and reasoning, but it is not obvious.
Catharina: “To me, the story has depth. Maybe it is just all in our heads and no one will get it, but I am not afraid of that. If you get it, you get it if you don’t then it’s fine. We have discovered a story that we would like to tell and it lives whether other people see it or not.”

We are invested in the story but have also quite large constraints when it comes to dialogue, facial expressions (no mouth!) and budget. The animators and musicians especially get some very important scenes that “have to feel just right”.

We have to remember to keep in mind two important questions when we plan the cutscenes:

We have, for a long time, had a very clear idea of what will happen in the game, as the overall story arc and plot points. And through lengthy discussions over the years of development we have discovered little by little truths of the characters and story.

As the different cutscenes are planned we gather for creative brainstorming sessions. This is where we throw out our ideas, discuss, get inspired. The story engages us and makes our meetings quite animated. The cutscenes take form as we draw, make impromptu sound effects and use our whole bodies trying to explain the correct feeling, timing, emphasis.

(When we’re not sketching on paper og acting out scenes, we actively use our whiteboard)

In the end everything has been written down, and we go through it again to make sure that everyone agrees and that everything important has been included.

Based off of these notes, Marianne draws storyboards for the cutscenes as a visual guide for the animators. The storyboarding process turns what has been big talk, dreams and wild hand gestures into visual images. They give an idea of what is possible and give us an estimate of how long the scene will be. In the end, some things need to be cut as our budget is not infinite. The storyboards show the angle, characters and action in a shot. If something is difficult to convey through a drawing it is added in a text descriptions below. The way Marianne draws them they are almost read like ordinary comics.

Even though she owns a wacom tablet, Marianne prefers to draw these on paper with a pen. Using a pen prevents her from being too caught up in making perfect drawings, or distracted by the number of possibilities that photoshop offers. 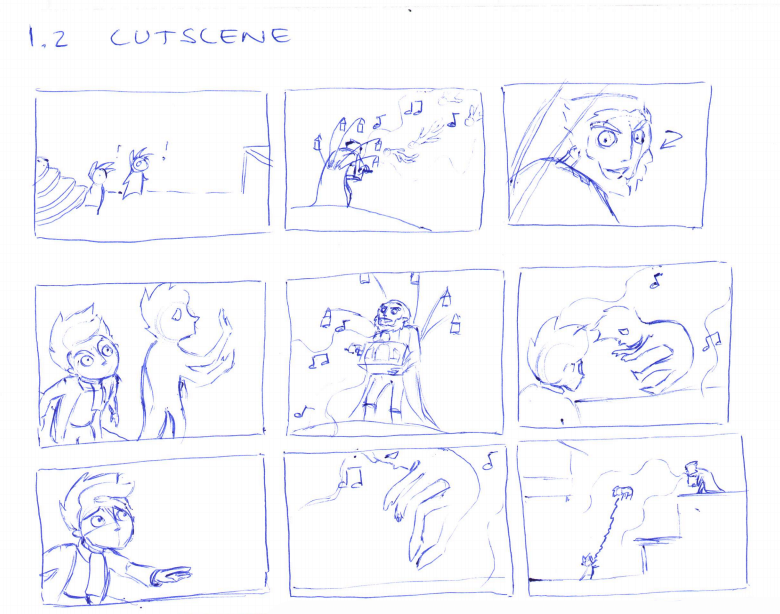 This results in very focused and fast sketching, which is all we need for this purpose. The storyboard frames aren’t necessarily drawn in the right order, and she may experiment with different angles in shots. Once the sketches are done they are scanned, and edited in Photoshop. This way they can be moved around, rearranged and put together into final storyboards. Others give their input, adjustments are made and then they are sent to the animators. 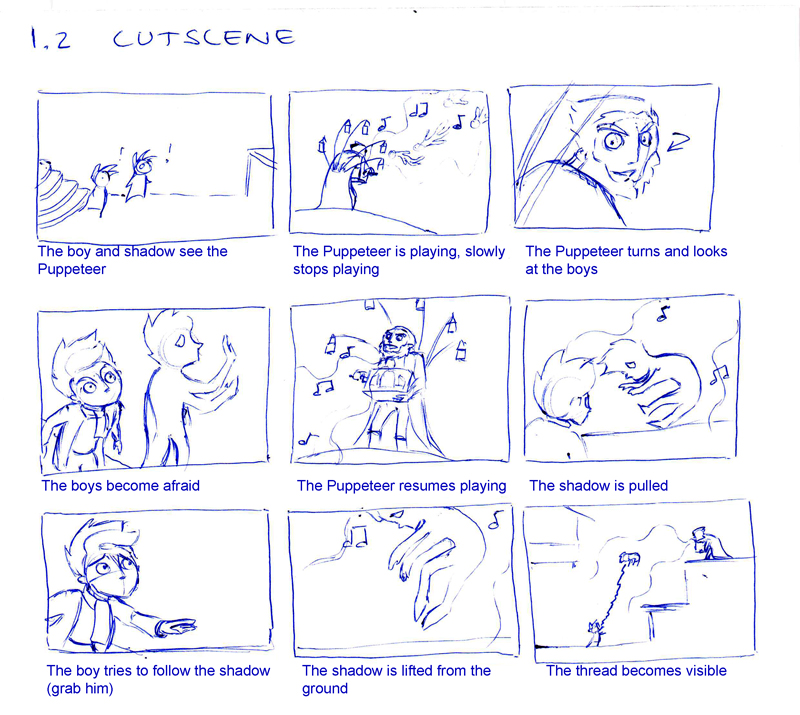 (Example of part of a  final storyboards)

The animators take over and set up the scene, usually it’s Klas, but we have also had other contributing animators. Once the scene has been set up, he makes rough animations based off of the storyboards. Artistic license is granted when he interprets the sketched poses and loose descriptions into movement. After one or more rounds of feedback and refinement, preview renders are made. These get sent over to the sound and music people so they can begin their work.
And here lies another challenge: There are emotions and small details that the storyboards don’t always manage to visualize. This makes continued communication important, but there is not always time and we do want the animators to feel free in their work. Not always having Marianne or Catharina the people invested in the story staring over their shoulders. “In this scene he is actually thinking <this> and feeling <that>” are some frustrating comments that the animators risk getting after almost being finished. Animator: “Um… he is really going through all that in these few seconds?” Catharina: “Yup, it is very important to me that you can see that in his expression”.

(Preview renders without light and effects show the scene and animations)

Catharina and Marianne follow-up with Ragnhild and Peter, as Ragnhild begins composing for the scene. In most cases these preview renders have the same length and timing as the final cutscenes will have and can therefore be used for working on a music piece.
Ragnhild will start by making musical sketches for the scene and send them to the others for feedback. Peter offers feedback from his perspective as a seasoned games composer, whereas Catharina and Marianne ensure that the music matches the intended mood and function of the scene. The sketch is refined and changed with each round of feedback until everybody is happy with the piece. 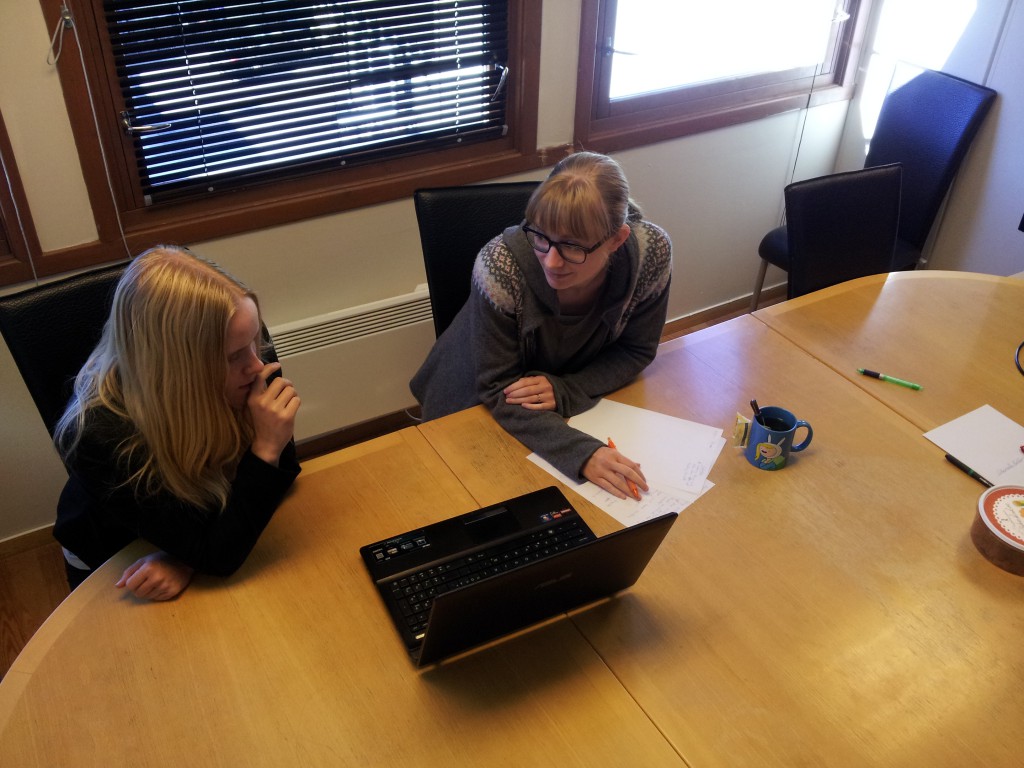 (Catharina and Marianne in an audio meeting with Ragnhild and Peter)

While the music is underway the 3D scene is set up with final textures and lighting. If there are other 3D effects these are set up, like particles or cloth simulation. Klas gets very invested in working with the different effects. He does researches options and plays around with the possibilities. The scene, once lit and ready, is rendered in different passes, and the passes are composited in After Effects. Another render is made when the music from Ragnhild is ready. The music is unmixed and the video not perfect, but it is intended for Jory and the sound people so they can create sound effects. 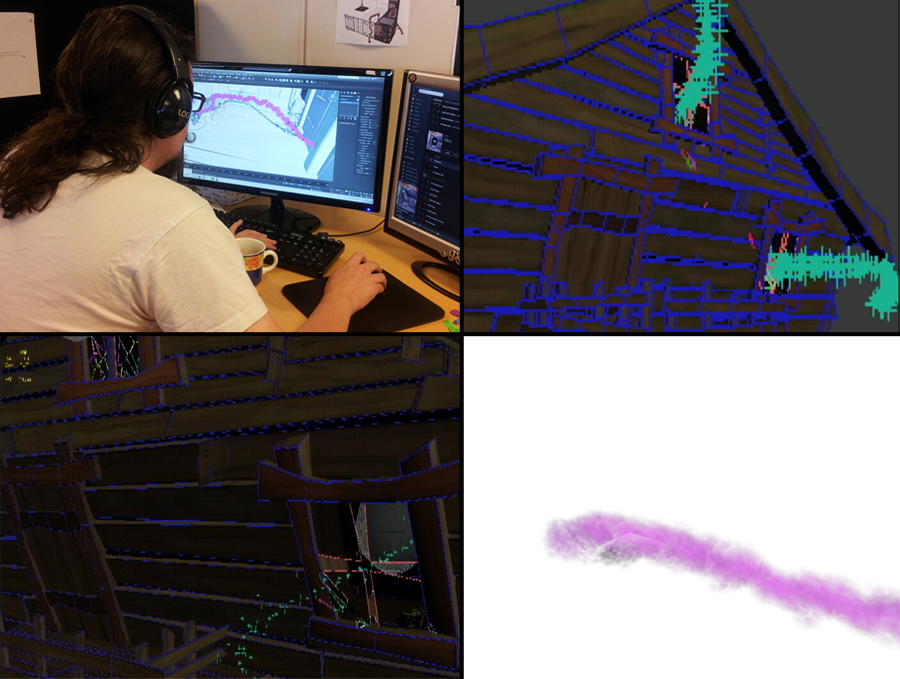 (Klas working on the effects. Small crosses indicate where the particles flow. The final render is at the bottom right. This is a separate pass that is added on top of the video.)

The sound effects and mixed music files are sent to Klas, who adds them to the video editing program and creates final versions of the cutscenes with visuals, music and sound.

(Parts of the process of making a cutscene)

So that’s a summary of our process when creating cutscenes. How visuals and sound come together to tell important parts of our story. We hope this has helped shed some light and de-mystify this part of the development of Shadow Puppeteer.