We finally released Shadow Puppeteer three weeks ago! It’s currently available through Steam, Humble Store and Glyph. Things have been incredibly hectic, which is why we haven’t been able to keep our usual blog schedule.

Today we want to share with you a little about the release process (what it was actually like), what has happened since, what we’re doing now, and about Gigacon.

Release
We wrote in an post earlier about crunch time. It’s not anything to plan or aspire for, but sometimes it happens. And even though it is unfair to compare video game development to waging a war, the words of Winston Churchill are true: “If you’re going through hell, keep going.”

When you’re in the middle of everything and it seems overwhelming, it can be tempting to give up. But giving up doesn’t help, so you just keep going, do your best, and try to see it through. And you deal with it with silly humour and good company whenever you can. 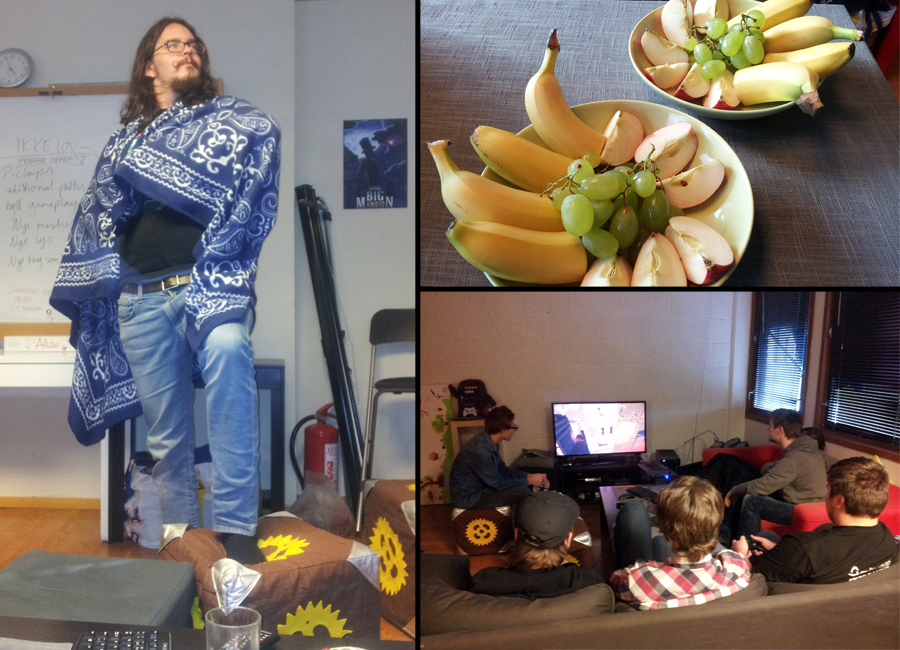 (Silliness, fruit and local students as game testers. All normal things in the time before release)

So right before 8 in the evening (local time) on September 29th, we pressed the publish button on Steam. It is a surreal moment. It was terrifying, but we were not alone!
We had company at the office with other members from HGC. Krillbite gave us two bottles of champagne. Runa, the HGC CEO, had made cake! 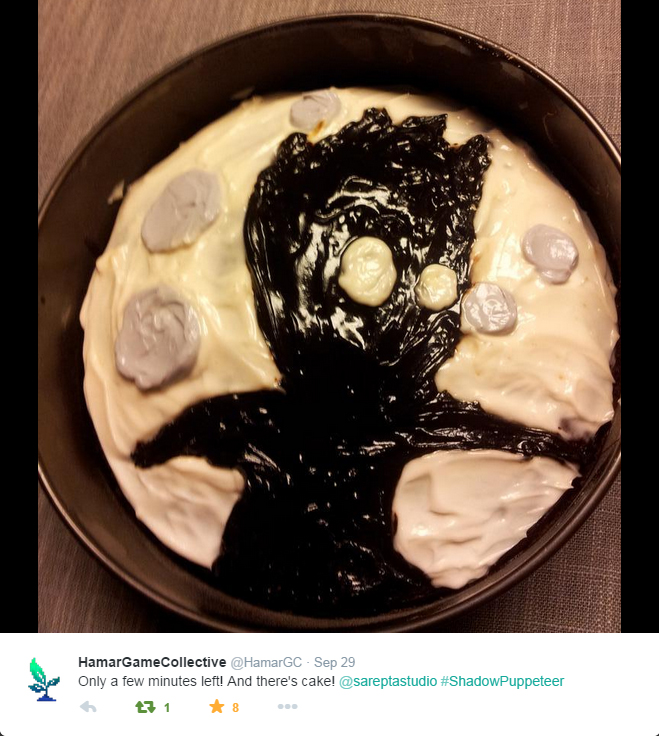 (Chocolate cake decorated with our logo)

When you’re in the middle of it all, your entire focus is on the task at hand. So, you forget insignificant trifles like food and sleep.  But we try to look after each other, and remind when necessary.

Some of us even took time off the following day to catch Ragnar Tørnquist’s guest lecture about “Storytelling in games”, with a bonus sneak preview of “Dreamfall: Chapters”. Which was very interesting! 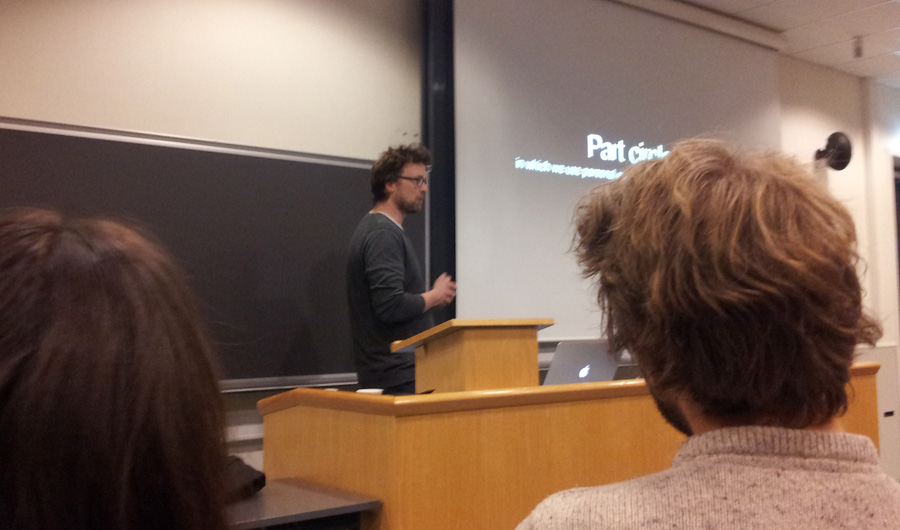 Gigacon
Later that week we attended Gigacon as Stand Indie- exhibitors. Gigacon is a new and ambitious LAN/trade show. We knew we had a lot of space, so we brought along our MDF stand and stools from last year’s SpillExpo.

(We made a big MDF stand for last year’s SpillExpo, that we brought with us to Gigacon)

Being at Gigacon was very different than SpillExpo. SpillExpo is incredibly busy and loud (like most trade shows are). Gigacon had a more muted atmosphere created by the LAN part, where hundreds of people were sitting in front of their screens deep in concentration. But we had people come over, talk with us and try our game. One group even insisted on playing through the entire game!

The lighting definitely affected how we experienced the two events. Where SpillExpo has usually been very bright,  Gigacon’s dark expo area surprised us. And unfortunately it made it more difficult to get good pictures. 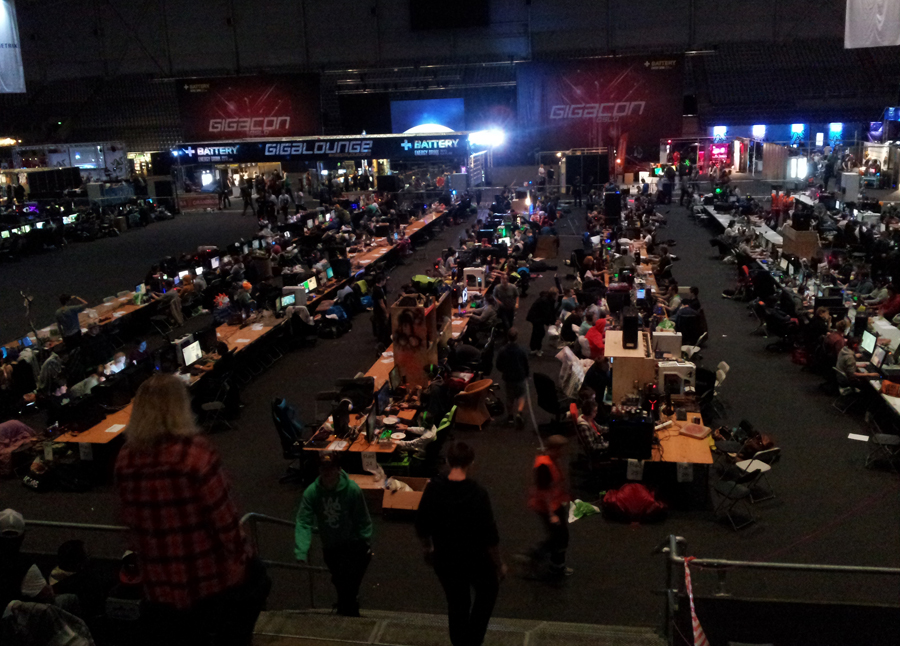 (The view of part of the LAN area at Gigacon)

But we had a lot of fun, and hope to be able to come back to Gigacon in the future. A big thanks to the organisers and our fellow developers at Stand Indie!

Our work now
When we released the game we received a lot of incredibly valuable feedback from the players. We could probably write a post in itself about receiving and dealing with feedback, but for now let us summarise it like this: Some feedback is valuable and makes your game better, other feedback is just a matter of taste. Taste, as many have said, can not be accounted for.
But we did receive a lot of feedback that we agreed with. We have made some improvements already (especially regarding checkpoints), but we are still working on some others. and of course, bug fixing. Even though you work to eliminate as many of them as possible before release, it’s hard to get them all. Kind of like Pokémon. 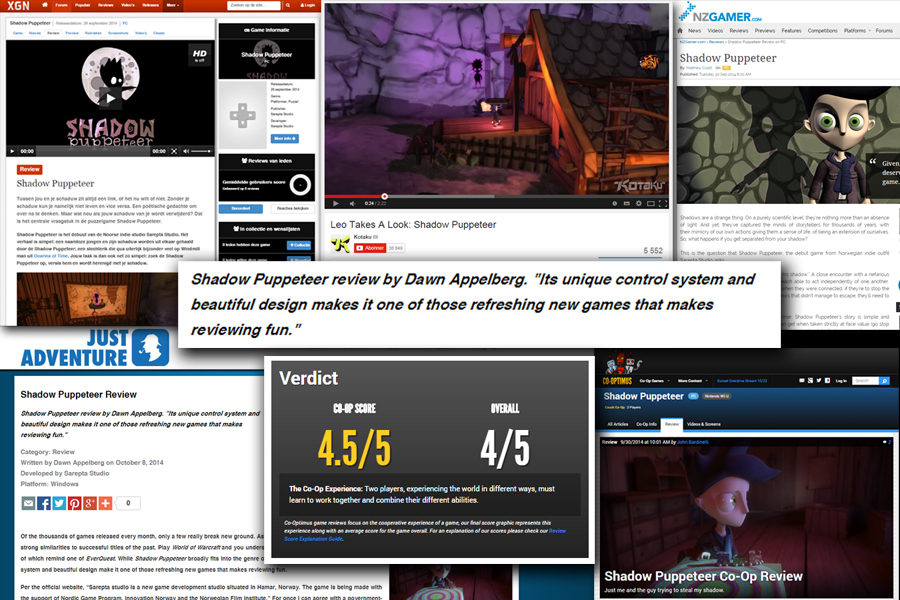 (Some of the reviews/articles/videos so far)

And we’re also working on getting Shadow Puppeteer out on Wii U! It might be difficult to imagine it being too much work getting the game onto the Wii U, but with a great console comes great responsibility. We have to make sure to meet Nintendo’s standards, which is something we’re only too happy to do. Adjusting controls and menus to fit the platform are part of that, but also optimizing, regional age rating and digital handbooks.

So as of now we don’t know when the game will be ready for a Wii U release, but we’re doing what we can and trust that we will get there in not too long.

With the final reviews we have received a score on Metacritic. Feel free to drop by and provide a user review yourself, if you like. http://www.metacritic.com/game/pc/shadow-puppeteer

If you have any more questions about what it was like to release a game (or anything else), please add them to the comments section. We’d love to answer them:-)